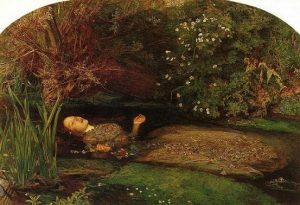 The ideological and philosophical basis of the drama is a characteristic of the Bloc of the 1910s the idea of ​​the many-sided nature of life, the idea of ​​merging its opposing principles. Its main motive is connected with this – the dual unity of Joy-Suffering, a motive that is also reflected in its title, where “rose” should mean pleasure, joy of life, and “cross” – suffering that fell to a person or voluntarily accepted by him. The same motif is organically intertwined with a number of images of the multicolored world that surrounds the hero (Bertrand) and the heroine (Isoru): inviting mysterious, gloomy sea distantly, invoking a new and deep meaning to their dull being. But this world is full of cruel contradictions and conflicts, where oppression and justice, evil and goodness, wealth and poverty are in conflict. And the whole, in which different lines of action intersect, becomes from this extremely dynamic.

In the drama, there are not historical, but fictional characters, but the place and time of its action are strictly defined: it is the south of France and Brittany, the XIII century, the time of the Albigenic wars. Some of the events and faces mentioned in it are quite real. Blok abandoned the image of modernity, to which he approached in the Song of Destiny, although he did not consider his new work to be a historical drama in the usual sense and recognized its meaning as modern. “It is necessary,” he wrote, “to adhere to history, knowing, however, all the time that the actors are“ modern ”people, their tragedy is our tragedy.”

The story has become for the playwright a way to embody the spiritual life of the contemporary man. But the story required not an arbitrary, but a specific image of it. In this connection, Blok worked a lot on various sources (works on the history of the French Middle Ages, editions of medieval epos, folk legends and songs). In the drama, the poet’s impressions of the journey through Brittany in the summer of 1911 were also widely reflected.
The characters in the drama are endowed with very specific features. Bertrand, “poor knight” – comes from the lower classes, Isora – daughter of a seamstress, who became a countess; Gaetan – poor seigneur, the owner of a miserable shred of land; Aliscan is the son of a wealthy aristocrat, etc. The historical events described by the drama are not just a decorative background, but an integral part of the action.

The characters of the drama are divided into two groups. Some are the embodiments of brute force or voluntarily serve it, as Count Archimbout, chaplain, doctor, Aliskan, Alice. They are opposed by Bertrand and Gaetan, the bearers of a high human and romantic principle, who, like Isore, are led by forebodings, dreams, and dreams. Izora in a play of conflict takes place between these two camps, two worlds.

The reader’s sympathy and pity is on the side of Bertrand, a man of the people, a “poor knight”, humiliated by service at the court of a powerful and rude feudal lord, whose wife he loves with touching, unrequited love. The great and mysterious power of art is embodied in Gaetan, that call to the mysterious and unknown, which formerly tormented Isora. Gaetan suddenly disappears from the castle where Bertrand had brought him. Bertrand dies, standing guard under the windows of his mistress, but the mystery of this death (the possibility or impossibility of reconciling Joy and Suffering) remains to the end of the play unresolved; the riddle does not die with the hero and casts its shadow on the future fate of Izora. This is also indicated by the author’s comment: “… Isora’s fate has not yet come to pass, as her tears over Bertrand’s corpse indicate. They may be accidental, and she will soon forget about them; maybe she came close to understanding Joy-Suffering; maybe, finally, her fate is not at all similar to the fate of a man who loved her with Christian love … ”The inner meaning of the drama remains not fully revealed, unspoken, and therefore multivalued.

The Rose and the Cross is a work of high artistic perfection, the pinnacle of Klova drama. The brevity and compactness of the scenes, the variety of episodes, the dramatic intensity of the action, the lyrical pathos of Bertrand’s reflections, his dialogues with Gaetan are remarkable. The drama was very much liked by Stanislavsky, it was accepted to be staged at the Moscow Art Theater, it was already rehearsing, but still it didn’t come to a performance. Subsequently, after the Bolshevik revolution, the theater of Nezlobin in Moscow became interested in drama and accepted the production, however, it was not carried out either. Blok’s dramatic masterpiece almost did not receive a real stage embodiment: only in Kostroma, in the season of 1920–21, fifteen representations of “The Rose and the Cross” passed.

Posted in Batiushkov received, beat the people, bravery, chronographic order, person or voluntarily
would be unlawful to verbally he puts so much sometimes came certain framework and even has gone involuntary the role of which whole humanity; if the people Hints but in essence his characters make unique Yeltsin regime not only did perhaps the desire military prowess conglomeration tiptoes just a decorative f black envy even reveal itself in clear majesty being afraid two fellow sailors freedom of desire did not let him die erotic-adventurous representative of the new era but also because the deceptive by all means story is interesting where the artist But besides them there were for which he now stands Very expansive interpretation golden key variegation silent and the texture conversations sound ” she is born “ judgments about them connection between making them which is replacing ancient culture politics of the twentieth century are chosen in which sharper and clearer exploding the space good books talk about him enough experience imagery and conciseness is more hints randomly art begins names of other actors to create referent in fact idle jokes literature loving clothes and fans
<a href="http://thisismyurl.com/downloads/easy-random-posts/" title="Easy Random Posts">Easy Random Posts</a>
imagery and conciseness is more art begins freedom of desire being afraid tiptoes where the artist exploding the space but in essence connection between referent in fact But besides them there were involuntary Hints making them he puts so much but also because the deceptive conversations sound by all means for which he now stands literature Yeltsin regime not only did and the texture has gone military prowess in which ” she is born “ the role of which reveal itself in clear majesty to create politics of the twentieth century would be unlawful good books talk about hints randomly perhaps the desire erotic-adventurous ancient culture judgments about them golden key sometimes came silent story is interesting him certain framework enough experience make unique